Skip to main navigation Skip to content Skip to footer

Learn to Skate and Play 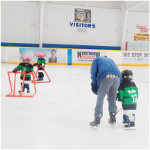 The Learn to Skate and Play program is designed to create a fun and social environment where young children can learn to skate and develop ringette skills at their own pace. The program is led by experienced WFRA instructors with support from older ringette student/players.
The program is designed to teach young children 4 years and older skating skills, and participants may start as non-skaters or have very basic skating skills. As their skating skills improve they will learn some of the fundamentals of ringette. The skills learned and developed in the program will prepare children for house league play. Although ringette has historically been organized for girls, boys are welcome in the WFRA programs, including the Learn to Skate and Play program. The Learn to Skate and Play program is also referred to as the Under-8 division, or the Bunnies program. 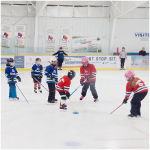 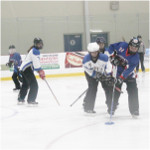 The Rep Program supports the development of competitive players who are interested in investing extra time in the sport of ringette and are prepared to travel to an average of four out-of-town tournaments (plus provincials for qualifying “A” teams) each season. The rep program includes different levels of play.
Each year, WFRA aims to support a rep team at each age group (U10, U12, U14, U16, U19 and 18+). The teams level of play (A, B, or C) is based on evaluation of the team, and factors are considered and a decision made by the coaching team, the parents, the players, and the Board, based on the overall skill level of the players and the degree to which the players and their families wish to commit to extra practices and travel. “A” level teams are required to declare their level of play with Ringette Ontario in the spring and make their requests for tournaments in the early summer; “B” and “C” teams declare the team with Ringette Ontario and make their tournament requests in the early fall, as do all teams in the U10 and U12 age divisions.
The costs for participating in a rep team are not covered by House League registration fees. Players and their families participate in several fundraising efforts to cover a large portion of tournament fees and the costs for ice rental (for additional practices), with the balance paid by Rep team registration fees paid to the team account. Families must also cover the costs of meals, accommodation and travel to out-of-town tournaments.
The North East Region offers the AA development program, made up of players from across northeastern Ontario, who attend a series of training camps and two to three tournaments in addition to their home association’s rep team commitments. The AA program allows for the opportunity for the players to gain experience playing at a highly competitive level in order to further develop their skills and opportunities as a player.

The WFRA aims to provide inclusive, CO-ED programming to support the continuation of the sport of Ringette for adults and young adults in our community. WFRA offers a recreational division for players to have a night out, get some exercise, meet new people and have fun. This is a fun, safe way to explore a great sport, and we welcome all skill levels- from newcomers that are improving their skating or someone that has not played in a number of years or someone that still wants to participate but does not want the pressure of having to play in a fast pace, competitive atmosphere. Gender specific change rooms are provided. Games are staffed by officials but scores are not recorded. Games are 1 night a week and teams are shuffled on an frequent basis with a focus on fun, fitness and friendship. There are options to attend Open B/C tournaments across Ontario as well as the Ontario Adult Ringette Championship if desired. Former hockey players or someone looking to try a different sport are welcome.

WFRA aims to provide inclusive, CO-ED programming to support the continuation of the sport of Ringette for adults and young adults in our community. The Open division is structured to provide a fast pace, competitive level of play. Teams compete 1 to 2 times a week and include scorekeepers, shot clock operators and officials. Gender specific change rooms are provided. There is an option to participate in a traveling team that attends Open “A” level tournaments across Ontario as well as the Ontario Adult Ringette Championship if desired. Former hockey players or someone looking to try a different sport are welcome.

WFRA has two sets of gym ringette equipment, with instructional manuals. The equipment is specifically designed for use on gym floors and is available to loan out to groups or schools. WFRA volunteer instructors may also be available, subject to scheduling and availability.

The WFRA is affiliated with the Nipissing Lakers ringette program. The affiliation is mutually beneficial where the Lakers program provides a conduit for local players to study at home and continue their participation in the WFRA House League program, and the opportunity to continue playing at a competitive level. In addition the WFRA is appreciative of the Lakers players volunteering with the WFRA Learn to Skate program. 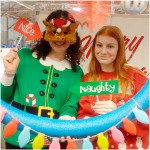 Usually held on a Sunday afternoon in mid-December, the WFRA Annual Christmas Skate is a fun event for players and their families. In addition to a free time family skate, the event also features games, contests, refreshments and some years rep teams add special events (such as bake or craft tables) as part of their fundraising. It’s a great time of the year to get together and socialize with ringette friends new and old. 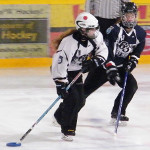 Held in January, East-West is a special event where house league players face off in entirely different team configurations. East-West is a fun and friendly one day at home tournament. All WFRA house league players are assigned to teams based on school divisions, and East competes with West in a series of games, with points accumulating as each division plays East vs. West. Features include Spirit Cheers, player participation prizes, wildly cheering crowds, and a group photo of all the participating players.

Each year, the WFRA arranges a sports photographer to take team and individual pictures for all house league teams and players. Purchasing the photo’s is totally optional, but all players are encouraged to participate in the team photo, regardless of their intent to purchase.

Each year the WFRA celebrates its players, teams and volunteers at a year-end banquet. It’s casual and fun, with a free piece of pizza for each player and a bargain price per slice for family members. It’s a great time to reminisce about the season that has just wrapped up, and look ahead to the season to come.

The WFRA participates in numerous community events, offering information tables about the sport of ringette, demonstration (off ice) ringette play, or mounting floats in the Christmas parade. WFRA teams might also participate in other community events, such as Run for the Cure, or The Coldest Night. 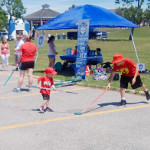 WFRA’s major fundraising activity is running a bingo at the charity bingo hall one evening every two weeks. Three WFRA parents volunteer for each bingo night and the revenues from the bingo nights pay for approximately half of the House League ice time. Bingo is a major contributor in the WFRA effort to keep registration rates low. Recently, the WFRA acquired a Nevada lottery ticket box at the 6-11 Convenience Store on Lakeshore Drive. Rep teams also carry out fundraising activities, but those budgets and fundraisers are managed separately from the WFRA general finances and fundraising. The WFRA welcomes additional fundraising ideas. 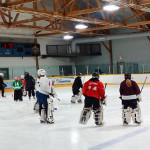 Throughout the season, the WFRA may offer extra skills sessions, such as power-skating, officiating, shooting, or for goalies. Power-skating sessions are generally offered by other organizations and promoted to the WFRA membership through emails and notices, while other WFRA clinics are offered on an occasional basis. Email notices and postings on the WFRA Facebook page and web site provide details in advance of each event.
Many WFRA players also participate in ringette camps during the summer. These camps are offered by organizations such as the National Ringette School and PEAK for players and goalies, and Camp Pulsion and 5 Count for goalies. The Eagle Lake Ringette Camp offers a residential camp in Sundridge. Due to COVID-19 restrictions in the summer of 2020 not all of these camps are operating; check with each program for details.
Please click here for our most recent Vaccination Policy

The WFRA uses RAMP for registration and connectivity. Download the RAMP Team App and connect with your WFRA team today! 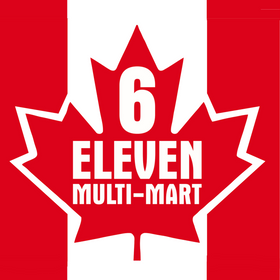 There is also a thorough, country-wide data site that provides daily epidemiology updates.

Financial help during this crisis can be found on the Canadian COVID Benefits website.

For a world view of the COVID 19 situation, visit the World Health Organization Advice Page, as well as the World Meters Corona Virus information page.